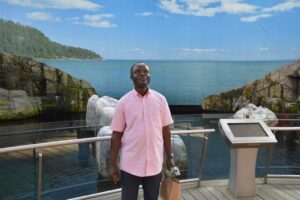 The Beng Family is saddened of the passing to eternity of our brother, father, husband, son, uncle, and friend, Dze Beng Ernest. Ernest gained his wings on Saturday October 8, 2022 in Greenville, NC, USA after a battle with brain cancer at the age of 51.

He fell ill late 2021 year and was initially evaluated and treated in Yaounde. Following discovery of a brain lesion on his brain scans, he was medically evacuated to the USA where he underwent Surgery, chemotherapy, and radiation therapy.

His cancer rapidly progressed resulting in deterioration in his health over several weeks. Ernest was a highly intelligent, soft spoken, generous, and humble man. In his student days, his name was synonymous with academic excellence. He loved teaching with a passion and to most of his students he was not only a teacher but also a father.

In 1990, he turned down a government scholarship to study engineering in Germany instead favouring attending ENS to become a physics teacher.  He was an enthusiastic learner completing the higher cycle of ENS (DIPES) and a Bachelor of Science degree in physics from the University of Buea. He was most recently a Vice Principal at the Government Bilingual High School in Babadjou, West region. Prior to that he was a senior discipline master and taught in Nkor Noni, Bui division, Basamba (where he taught English language and geography) and Mbouda, West region. He was the author of several books and didactic material for GCE “O” and “A” level physics among others. He was also proprietor and co-owner of Green Light College Mbouda. He was a facilitator and advisor to arriving visiting teachers’ for the math and science program of the US Peace Corp Cameroon.

Above all Ernest was a family man and his family went beyond his biological family to include his students and neighbours. He leaves behind his wife, 4 children, mother, extended family members, students, colleagues, friends, and neighbours to mourn him.

We are very grateful for your prayers, thoughts and support during these very difficult moments.

In lieu of flowers please consider a donation to Pitt County Care by sending a check to: